Making a child's dress out of a T-Shirt 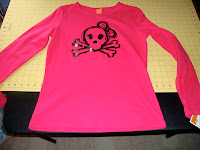 Okay, so this is similar to the last one, except that this time instead of using a large men's button down shirt, I'm using a girl's t-shirt.  And this one is easier!  This is a girl's shirt I bought on clearance after Halloween.  I bought it for myself but the long sleeves were too restrictive for me.  Instead of getting rid of it I decided to make my daughter a dress out of it since I liked the design on it.  To begin with I just cut up the sides and sewed them back together in the shape I wanted: a simple A-line dress style as seen here. 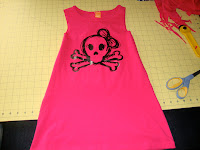 Next I cut off the bottom in two segments.  The first cut was to make it the right length for my little girl (which I determined by trying it on her and eye-balling it).  Then I cut the bottom 2" off of this in order to make a ruffle border for the bottom on the dress. 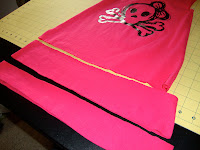 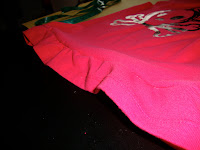 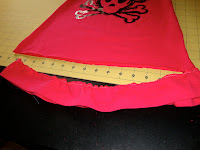 After I attached the ruffle, I then tried the dress on my daughter again to determine how much the arm holes needed to taken in.  The neck-hole was too big for her, so I cut the seams at the shoulder and cut off the additional length I wanted removed (in this case I cut shoulder seam and then chopped off an additional 1" or so). 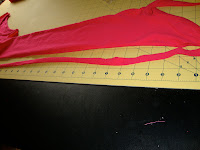 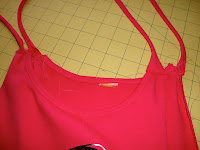 Once I did this, I could have just sewed the shoulder seams back together, but I decided instead to cut some strips out of the sleeves I cut off in the beginning and use those to make ties for the shoulders.  This makes the shoulders adjustable, and makes for cute little bows!  I had to gather the top of the arms pieces a little bit to make it fit the ties evenly since I didn't measure anything when I cut the strips and they were pretty narrow.  You can see this in the picture.  I kind of liked the effect.  Now all that is left is putting the dress on your little girl.  My daughter really likes it and hasn't wanted to take it off! 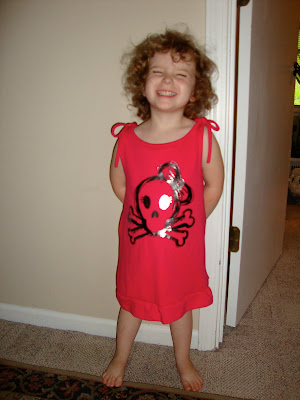