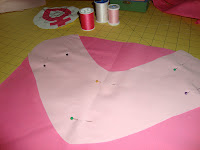 Yesterday I posted about making the Atom Eve logo, and today I'm going to take this apron to its completion.  This first photo is a decorative element for the bib.  You can see the logo waiting patiently in the background!  I debated how to add this V shaped piece.  I was originally going to piece and sew it all together, but decided that the seams in the back would make the bib bulky and that appliqueing it onto the bib would leave cleaner lines, so that is what I did! 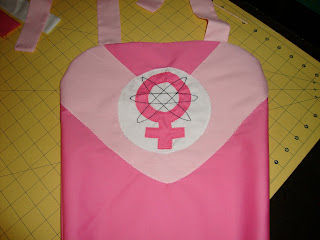 I then put the logo on top, stitched it all down and sewed the straps in.  This photo is the completed bib.  I put more detail about this process in the making of Harley Quinn, so I'm skipping some steps :-) 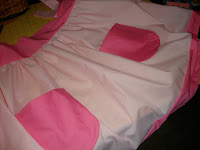 I made this skirt similarly to how I've made most of my aprons skirts with the exception that I put a band across the bottom.  This was sort of an afterthought I had after drawing up my initial sketch (which I'd post if it didn't look like a 5 year-old drew it!).  Atom Eve wears bright pink boots and I thought the apron would look good with a bright pink element at the bottom. 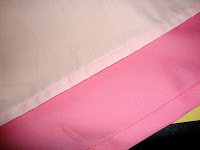 This is a picture of the seam on the back of the skirt where I sewed on the band.  This is called a French seam.  It allows you to sew together two pieces of fabric without a lining and have no unfinished edges.  It's the only way I've found to do this that leaves a really nice clean finish.  This is the same technique I used to piece the red and black sections of Harley Quinn's skirt together. 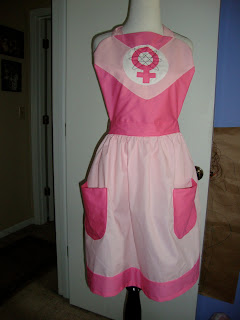 And....here she is!  My mannequin really likes this one because it is so feminine, but I definitely think this one looks better on a human body because there is just something about having a head, arms, and legs.
Share
Posted by Bethany Sew-And-Sew