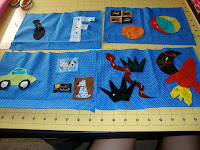 To start with, although I came up with the idea to do this on my own, I'm not the first one to have the idea.  I found this tutorial online and used it for inspiration.  The differences between ours is that I used 100% cotton fabric rather than denim (sewing lots of denim together makes my sewing machine angry) and I used some different appliques in my attempt to simplify the process.  For instance, my car only has one window and I didn't create a dog out of fabric, but rather just cut a couple dogs out of some dog fabric scraps I had laying around!  (This is a great way to use fabric scraps!!!) 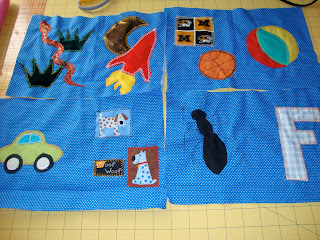 The first picture is of all the fabric scraps I cut out and pinned down.  I used 4 rectangles, which will make a front cover, back cover, and 6 internal pages.  Whatever images you want for the front and back cover need to be appliqued on the same rectangle, with the image for the front being on the right.  I wanted my nephew's initial on the front, and decided to put an ant on the back.  I wasn't picky about the order of the pictures, so I just made sure each rectangle had two images.  The size of rectangles doesn't really matter, just make sure all four are the same size.  These are something weird like 11"x7". 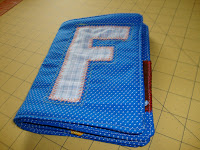 Once everything is sewed down, you will pair up your rectangles in two groups of two.  Sew each set together, with right-sides together, all the way around except for about a 2" opening somewhere along one of the side seams in order to turn it out.  Once it is turned out you can top stitch around the edges, closing the opening you left in the side, and leaving you with two very clean and finished rectangles.  At this point you just lay one down on top of the other, being careful to line them up nicely, and sew them together with a seam down the middle. 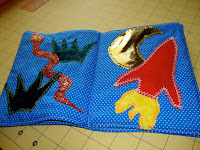 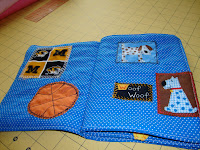 I really like my snake (I used faux snake-skin fabric for it!) and green velvet grass.  I also used some shiny gold for the moon behind the rocket ship.  On the left you can see that I made a basketball by top-stitching on an orange circle., and you can also see that I put one of the dog pieces too close to the edge...remember your seam allowances!  Oh well!  Handmade is handmade right? 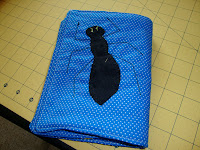 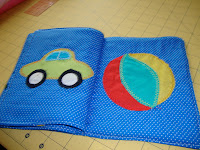 This car is made out of four pieces.  The wheels are made out of black and white polka-dotted fabric so I didn't have to cut out the white circles, and the window is one piece of blue that I split in half with top-stitching.  The beach ball is made of a red and yellow half circle with a blue eye-shaped piece of fabric on top (I found this much easier than trying to cut out the actual shapes!  The ant was made by cutting out a body shape and then just top-stitching some legs.  I completely eye-balled this, so yes, they aren't exactly even!  I also added little eyes to the ant and snake with some green thread. 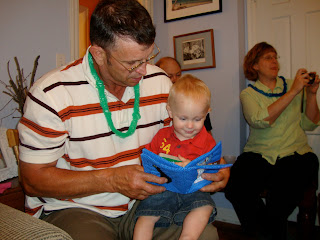 And here is my adorable nephew on his first birthday looking at the book that Aunt Bethany made him!  His Papa (my dad) is having a great time looking at it with him.
Share
Posted by Bethany Sew-And-Sew