I 100% borrowed the idea for this shirt.  I originally saw this shirt on Crafster and from there found the original blog entry about it.  This project is an homage to the original and the methods I used to create it might be similar, although I have no idea the exact way the original is made.  I just used the pictures then tried my best to recreate it! 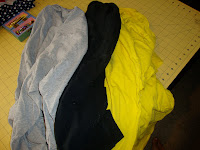 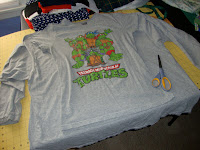 I started with 3 XXL men's t-shirts.  The black and grey ones are long-sleeved.  Because the gray one was significantly too big, I basically had to make a new shirt with it.  I used a shirt that fits me well and cut around it using the original neck hole at the top.  I had to redo the shoulders and the sleeves though. 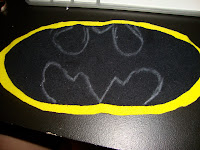 I cut three ovals out--two in black and one in yellow--them trimmed them so that the largest was black, with a slightly smaller yellow one on top of it, and another slightly smaller black on to go on top of the yellow.  I then used tailor's chalk to draw a bat on it and cut out that shape.  This was then pinned and sewn onto the reconstructed gray t-shirt. 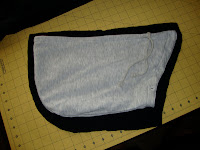 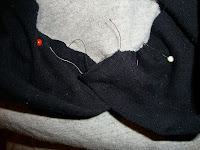 I happen to have a hoodie with a detachable hood, so I used that as a guideline for cutting the hood out of the black t-shirt.  Then I sewed this into the neck hole of the grey t-shirt, overlapping the ends in front. 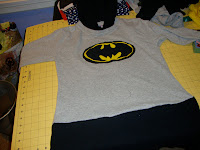 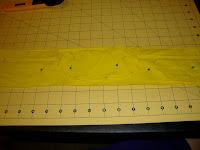 The yellow on yellow here was a bad idea!  Sorry!  This is the utility belt.  I pinned on three pockets with the center one being an oval to sort of look like a belt buckle.  I just played around with it for a little while to decide where to place the pockets and what shape I wanted them to be.  Then I sewed on the pockets and attached the belt to the t-shirt.  (All the while I am measuring this stuff so that it will line up correctly--I'm just leaving that boring stuff out!) 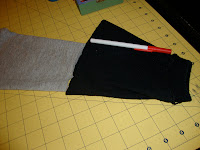 To make the black ends to the sleeves, I used the bottom cuffs of the original black t-shirt and cut it to the length I wanted.  Since this shirt was large, the sleeves were large too, but instead of trimming them to fit, I used the excess bulk to make spikes for the sleeves.  I drew a line where you see my pen laying to show where the sleeve was supposed to be. 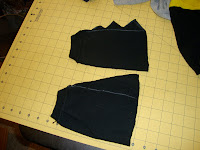 Then I cut the fabric above that line into spikes.  Here you can see the before and after of my two sleeve ends.  While they were inside out I sewed along the spikes, then turned it out and sewed along the straight line to make a nice cylindrical sleeve.  This left the spikes sticking out like little tabs.  I then attached these to the end of the gray sleeves!
And here is the finished product, one with the hood down and one with the hood up.  In the original, the creator put little bat ears on top of the hood.  I may still do that, but I haven't added them yet, so for now the hood is just a simply hood. 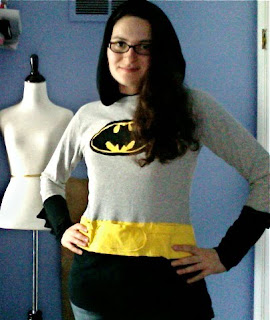 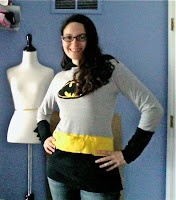