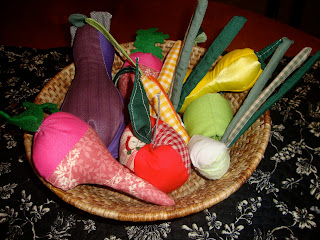 Back in May I made these vegetables (and fruits!) for my Mother-in-law for Mother's Day.  I don't have a tutorial for making these because I just sort of made them up.  I played around with how to cut the fabric pieces and stitch them together, as well as with colors. 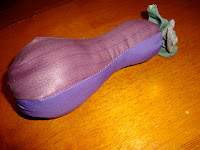 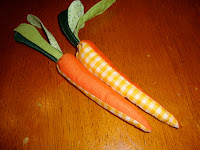 The eggplant is probably my favorite one, but I also like the the colors I chose for the carrots.  I like how the leaves look on both. 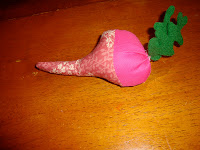 This could be a beet, although it looks kind of like a radish too...so it's whatever you think it is.  I made another one that was a lot fatter. 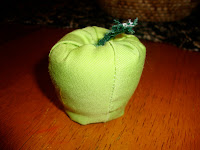 To the right is what was supposed to be a green pepper, but everyone thinks it's a green apple.  I think I chose too light of a green.  I'm not offended though because it does look like an apple. 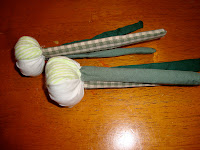 These onions were the most difficult.  I made the tops out of long tubes of fabric that I stuffed with rolled up paper to make them stiff.  It's hard to see in this picture, but the bottom is made of white cotton alternated with a white and green striped flannel that I though looked "onionish." 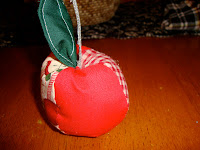 This is an apple, but it's more obviously an apple because I used an apple fabric for one part of it.  After finishing these I decided my green pepper does indeed look more like an apple but if you think about it, apples and peppers have a similar silhouette.

If you look in the basket picture at the top you'll notice there is also a yellow squash, but I didn't take an individual picture of it because I think it looks wonky.  It's too narrow in the middle and not big enough on the bottom.  But it looks a lot like some of the very wonky squash that come out of my parents' garden!
Share
Posted by Bethany Sew-And-Sew