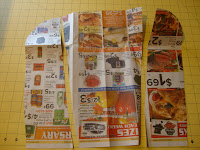 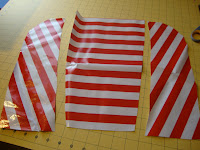 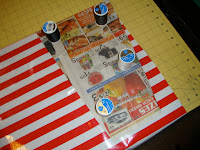 I sort of took some artistic liberties with this one.  The bib was supposed to have horizontal red and white stripes, and it does, but in my head I had an idea that I had to see through.  I started by cutting out a bib pattern in newspaper and splitting it into three sections.  I cut these sections out of the oil cloth.  This picture shows me using spools of thread to hold down the pattern so I wouldn't have to pin it.  Pin holes remain as punctures in oil cloth, so I try to use as few as possible!  Here are my three sections cut out.  As you can see, I cut the side sections on a diagonal.  I figured this would make the waist appear more narrow and offset the horizontal stripes, besides simply being more visually interesting.  I sewed these together then added a pocket on the bib that mimics the shape of the center bib column. 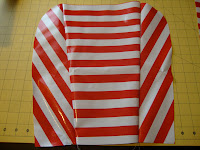 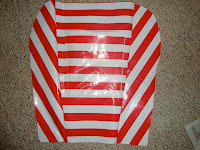 This fabric is really hard to photograph since it is so shiny.  The flash on my camera makes it look a lot flatter than it is!  I have enough oil cloth left to make another bib if this idea doesn't turn out :-)  This one is supposed to mimic traditional candystriper pinafores. 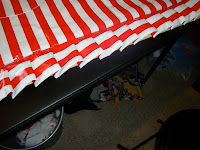 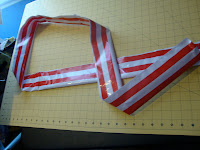 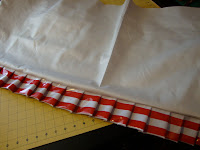 Next I made the ruffle for the skirt.  (I also cut out and sewed the pockets to the skirt exactly like I do on other aprons, so I left out the pictures)  I had to sew fabric together to make a strip long enough.  I physically could not gather this material because it was too stiff and my thread kept breaking!  So...I made pleats instead :-)  I really love the look of it with the stripes!  I made the ruffle stripes go in the opposite direction from the skirt.  Then I attached the lining to the back.  The lining doesn't match intentionally.  It is an ivory tinted cotton with the intent of adding a vintage flair to the apron. 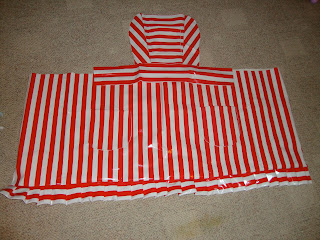 Here are the unfinished pieces laid out to give an idea of what is happening with this thing!  I still have to figure out how to gather the waist line and add criss-cross straps to the back and ties to the waist...but I got tons done on it today!  I'm still not sure what I'm going to use for ties since the oil cloth is too inflexible to tie.  There are pockets on the bib and skirt but they are hard to see because they are camouflaged!
Share
Posted by Bethany Sew-And-Sew