Country Garden Apron out of a Recycled Jean Skirt 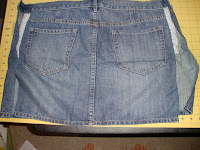 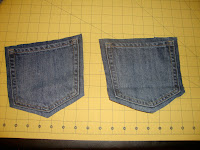 I was given the idea to make a garden apron out of recycled jeans by a friend named Sandra a while back, and I've been meaning to do it ever since.  I decided that her birthday was a great chance to put one together!  I started with an old jean skirt of mine.  I cut off the back being careful to cut behind the belt loops on the sides so that the apron front would have two sets of loops for attaching garden gadgets.  I cut off the back pockets, going around the seams with enough room to stitch them down again later. 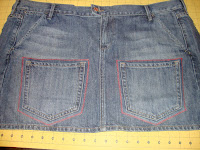 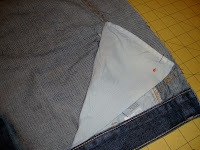 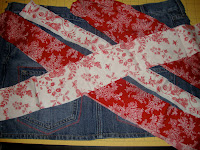 Make sure you pin up the existing pockets in the front so that you don't accidentally sew them down when you attach the other pockets.  You want these to remain functional as well!  Sew the back pockets onto the front.  I used a red zig-zag to give it some personality and then top-stitched over it to lock it down. 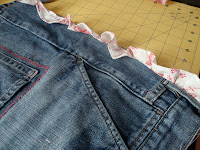 I then cut various strips of fabric to add embellishments.  I started by adding a small white ruffle to each side.  When I make ruffles I usually cut the fabric about 1" wider and about 150% to 200% longer than I want the finished ruffle to be.  The longer you make it, the fuller the ruffle will be. 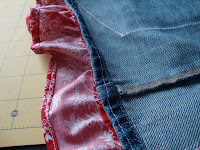 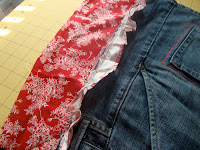 I then added a non-ruffled red strip to each side before adding the final ruffle to the bottom.  I chose fabric that had a "bandanna" sort of feel to it. 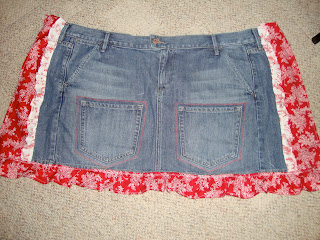 Here is the finished product minus the straps.  I forgot to take a picture of it after I attached them for some reason.  They were made of the white fabric, and are long enough to wrap around and run through the belt loops and tie in a little knot at the front.  Or you can simply tie them in the back.  This project could also be done with jeans (not just jean skirts) fairly easily.  It was a fun change of pace from what I normally make!