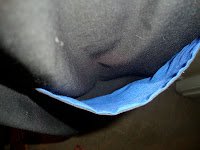 I'm really excited to add this Lady NightBird apron to my collection because it's been awhile since I've done something brand new.  I really love how this one turned out.  I wanted to do blue pockets or a blue waistband at first just to break up the black, but that wouldn't have been as true to the original design I laid out.  This apron is going to a big fan as a surprise, so it was decided to keep it black beneath the neck.  This didn't stop me from trying to add a few details to it to add some more color.  For one, the pockets on the skirt are lined in blue.  I also made both the waist straps and neck straps blue, and even lined the back of the bib in blue.  So anyways, there's more blue on this thing than meets the eye at first! 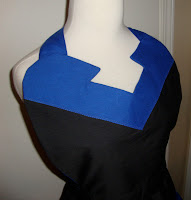 I really wanted to carve out the neckline on NightBird's chest instead of appliqueing it on over the black, so I did just that, reinforcing it with interfacing.   The absolute best thing in the world about working on these projects is that they are one-of-a-kind and I love being able to collaborate with people and make the fans of these characters happy.  Now I've got a hankering to make a Robin apron. 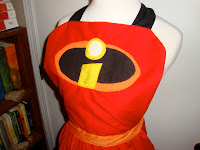 Although I have done "Incredibles" aprons before, this is the first one done in the ladies style and here's a picture of a child's size as well.  This child's size chef-style apron is a little big on my cardboard girl because it's a size 7/8 and she's only a size 5...but my husband wasn't feeling like cutting out a new cardboard kid for me :-)  This set is a gift for a mother and son who enjoy using their super-powers together in the kitchen!


RiGBY the Barbarian is my husband's new webcomic featuring a witty heroine as she navigates a world of reanimated skeletons, warriors on dinosaurs and savage snake-men.  The artist, Lee Leslie, has described the webcomic as combining "the fun world-building of high fantasy stories like Lord of the Rings or Conan the Barbarian with a fun and relatable protagonist.  Basically, she’s the love child of Indiana Jones and Red Sonja.”  I like to think of it as a fun mashing of Masters of the Universe and Braveheart.  Either way, you can't go wrong.  It's a fun read!

RiGBY may have already ventured into the world of high fantasy, but now the heroine and her webcomic are venturing into the world of print comics.  Pre-orders are currently open and will run until February 11.  This is RiGBY’s first official print appearance, and the 20 page, full color comic will only be available at conventions and signings after the pre-sale.  If you pre-order the comic you will also be treated to a high resolution digital version.

RiGBY, created by writer and artist Lee Leslie, first appeared online in May of last year, and is currently nearing completion of it’s third chapter. New installments are posted weekly.

Further press inquires can be directed at creator Lee Leslie via email at rigbythebarbarian@gmail.com.
Share
Posted by Bethany Sew-And-Sew 24 comments 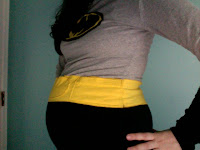 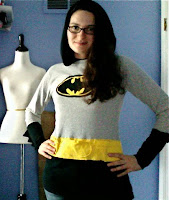 I thought for fun I'd post some before and after pictures of the Batman hoodie I made myself last year.  This was a t-shirt reconstruction project that I found on the Internet and wanted to imitate.  I just think it's hysterical to wear now!

I'm winding down right now and have enough projects to keep me busy for a while, so I won't be taking nearly as many orders.  I've noticed a lot of comments about the sort of feminist/anti-feminist vibe of transforming powerful female figures into girly aprons, so I decided to address this the same way I address my own life since I'm a stay-at-home mother in the 21st century.  The beauty of today's world is the opportunity to make our own decisions, so if you're a tough no-nonsense Amazonian, and you want to bake a batch of cookies, no one can tell you to do otherwise, nor should you be chastised for it.  I've also warped several male characters into aprons too, so I don't play favorites :-)