Zelda's Dungeon and a Goomba

If you are like me, and a bit of a nerd, you might appreciate my friend's awesome oil paintings. He has both of these for sale in his Etsy shop right now.  They are super cool. I'm trying to figure out what I can make for him as a trade to get him to paint a Princess Peach for my daughter's bedroom!
Share
Posted by Bethany Sew-And-Sew 8 comments

For my Father on Father's Day

My father was exceptional when it came to showing his children this country. I've realized this as an adult when chatting with people and reminiscing about family vacations. Our times traveling together make up many of my most fond memories of my father. He loves to get out there and see things and this love has taken me to:

The Rocky Mountains
The Smokey Mountains
Appalachian Mountains
Big hills that aren't really mountains, but he likes them anyways
Little Big Horn
Jamestown
Gettysburg (twice, once on the 125th anniversary), Pea Ridge, Shiloh...you name it
Mt. Rushmore
Grand Canyon
Yellowstone
Museums and more Museums
Anything to do with Dinosaur bones
The Great Lakes
Washington D.C.
Myrtle Beach
O Canada!
Amusement Parks...Disney World, Busch Gardens, Six Flags...
Street Festivals (he loves a good street festival)
Historical Reenactments
The Gulf of Mexico
Rare Visions and Roadside Revelations
Zoos, Aquariums, and every historical plaque put up on the side of the road
Mt. Vernon
The USS Alabama
Mackinak Island
So many Interstates
National Parks and State Parks galore
Places that are so beautiful you want to cry and places so sad you want to cry
Places with audio tours that tell you when to start and stop the tape but they always get off somehow and no one can ever get the tour to line up with the location we're at
Weird motels in towns you've never heard of
The Austin Bean Eatin!
Statues of people that were important once
Presidential Libraries
The State Fair. Every year.
Places like "The Biggest Natural Land Bridge in Arkansas" and "The Home of the Purple Martin"
Waterfalls
Places that sell collectible spoons, moccasins, and keychains with your name on them
Places with taxidermied animals and reconstructed Indian encampments
Dodge City
Albuquerque
The Petrified Forest
Devil's Tower, the Badlands, The Corn Palace, and the other wonders of South Dakota
The place where I saw the Hawaii license plate and finally got to finish one of those license plate books
State Capitols
Places you don't want your car to break down. Like seriously, can we get back to civilization?
Mesa Verde and other Indian ruins that make your jaw drop
Nature trails and other places to get poison ivy
Water Parks and other places to get really bad sunburns
Camping and other places where you get bit by mosquitoes
Branson
Osceola Cheese Factory
Flea Markets and Antique Malls
Places where I wore sunglasses and was thereby cooler than when at other places
Places where I was so bored I just sat on one of the cannons outside and waited
Places you have to drive 2 hours off the highway to see and they are kind of okay, but you pretend they're fascinating because you drove so far to get there
Rest stops and anywhere else that has picnic tables
Grocery stores across America where I whined about not wanting to get bologna this time
Kansas in July with no air-conditioning
Breakfast buffets, but only on the last day of vacation and we had to order water
Florida, Utah, Texas, Pennsylvania, Wyoming, and everywhere in between.

He gave me a love of travel, a respect for history, and a sense of national pride, all while having no fear of doing the quirky. Yes we have a family photo of us taken in an ol' timey photo booth, but we never panned for gold because that's expensive and a racket. 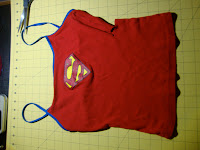 Don't ask me why I uploaded this picture sideways...but you get the idea...it's a tank top. A tank top that is waaaay too small for me anymore (thank you baby #2), but I love superheroes and I wanted to do something with it. I decided my daughter needed a Super Girl dress.  This tutorial can be done with a tank top or shirt that already fits your child as well. 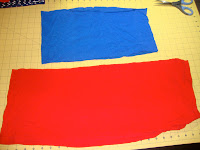 Step 1: I took two adult t-shirts (one a Medium and one a XL) and cut the bottoms off of them so that I had two tubes of fabric. One tube is noticeably smaller than the other one. This is intentional. If your t-shirts are the same size, cut one and sew it back up smaller so that you have about the ratio you see here. The combined length of these two tubes should be however long you want the skirt part of your dress. 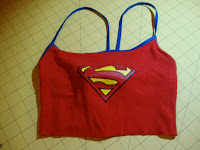 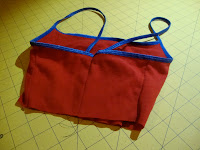 Step 2: Try the tank top on your child and cut it off just below the chest. Step 2.5: If it is too big for your child, like this one was for my daughter, cut it in the middle of the back and bring it in. 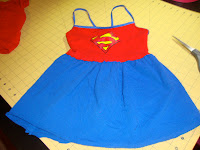 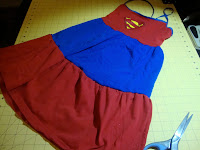 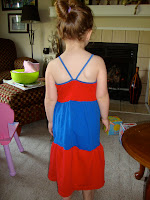 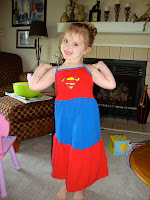 Step 5: Adjust the straps to fit your child. I left the straps how they were after bringing in the back of the tank top. I liked the "V" it made. You can also cut them off and attach them at the sides like a traditional tank top. Whatever you want!

I'll admit I did some other tailoring to this one to get the tank top to fit my daughter better (there are some darts in the chest) but you don't have to do that, especially if you start using one of your child's tank tops.