How to Make a Fleece Viking Hat 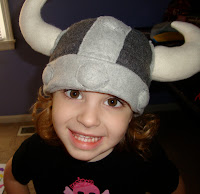 So you want to make a Fleece Viking Hat for your little barbarians? I posted an entry about doing this a year ago, but I never really showed how I did it, so here's my best attempt at doing so.  All images can be seen larger by clicking on them.

First, make a hat dome!!! This tutorial is using the dome top of a basic fleece hat. I wrote a tutorial on how to make it here. This pattern does something different with the hat band though.

1. The Hat Band and Center Strip: Cut out a band the circumference of your child's head by 4", and a matching strip that is the length of your hat from the back center to the front center (going up over the crown of the head) by 2". Also cut out a total of 9 (or however many you want) 1.5" circles that will become the rivets on your hat. The number of circles really doesn't matter. If you want one in the center front, make sure to line one up in the dead center of your hat band.

2. The Rivets:
Sew 4 circles to your top strip, evenly spaced, about 3/4 of the way around. This opening will be where you put a pinch of stuffing into the circle. You don't really need much stuffing to make them look 3-D. After each circle is stuffed, sew closed the gap. Do the same thing for the hat band except that since the hat band will be folded in half, sew your circles to top (or bottom) 2" of the band only. I spaced my rivets so that one would be placed on the back center seam of the hat band once it was sewn together. Sew the two short ends of the band together and (if necessary) sew your last circle on top of the seam and stuff. You can now fold your band in half. You should have one side with rivets and one side without.

3. The Horns:
Cut out 4 horn pieces (2 for each horn) the size and shape you want. Don't make them too long or they won't stand up very well. Cut out 2 circles (1 for each horn) that will be the base for the horns. These circles need to be about an 1" bigger around than the base of your stuffed horns. Sew two horn pieces together, leaving the bottom open, and stuff. There are a few ways to sew these to the circles. I demonstrated one in this graphic. Another way, for a cleaner finish, would be tuck in the bottom of the horn and hand sew it to the circles.

Now that you have all the parts made, sew your top strip over the center seam of your hat dome. Sew the circle bases of your horns to each side of the hat, centering them over the seams on the sides. (the circles help support the weight of the horns more than sewing the horns directly to the hat). Lastly attach your folded hat band to the base of your hat dome. I show how this is done in my basic fleece hat tutorial. 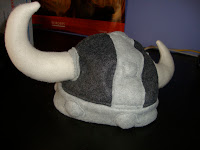 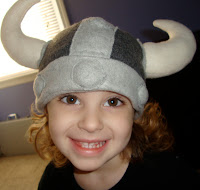 Here are some photos--more can be seen in my original blog post here.

These hats vary slightly because I was experimenting with the design and construction when I made them.