Avant-Garde Skirt made from a Men's Shirt--Tutorial! 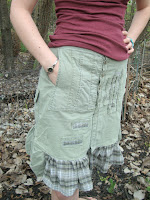 I'll admit it--I'm very proud of this skirt. I love it. I wear it often, which is the true test of whether or not you are truly satisfied with something you've made. I made it using a men's XXL short-sleeved shirt, and another men's shirt for the contrasting plaid, although you could use any scrap fabric for that part. If you're skinnier than me, you could probably do this with an XL or L shirt, because I did have some fabric leftover. But bigger is always better when reconstructing shirts because it gives you some room for error and more fabric to work with, which never hurts! This tutorial has a lot of wiggle room because this is an avant-garde project that requires creativity and a bit of filling in the blanks. This is mostly to show you how to maximize what can be done with a shirt, and how I personally transformed it into a skirt. The detailing is up to you. Here is another example of a skirt made from a button-down shirt that you might want to try. 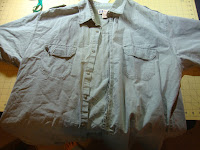 Step 1: Locate the appropriate shirt. For this type of "cargo-ish" skirt, not just any shirt will look right. Try to find one with pocket flaps, in an earthy tone, and if it has little button flap thingies on the shoulders-yay! I'm using an old shirt of my husband's. 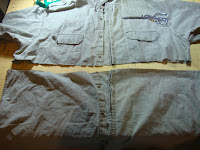 Step 2: Cut the shirt in half, below the pockets. 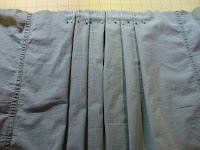 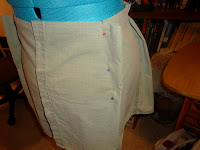 Step 3: Place the "skirt" (the bottom half of the shirt) on yourself or a dress form your size and start pinching. There was a lot of excess fabric in the back, so I chose to make pleats there, but you can gather it up however it suits you. I used darts in the front.

Step 4: Cut out the pockets from the top of the shirt, cutting closely around them. 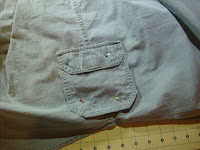 Step: 5 Place the pockets where you want them on the body of your skirt and sew them down. I chose to place them on the side seams at the bottom of the skirt. You'll notice that this shirt has a curved edge at the sides, like many button-down shirts do, so this led me to the next step. (skip to step 10 if you're satisfied with the length and don't want to bother with anything else on the bottom. You could also at this point just add a simple ruffle all the way around and ignore the sleeves stuff I did below) 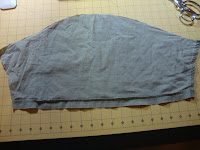 Step 6: Cut the sleeves off your shirt top, snipping closely to the seams, then cut the sleeve open. You'll be left with a piece of fabric this shape. 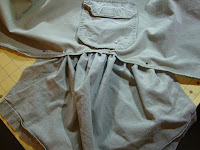 Step 7: Gather the top of the sleeve (the rounded edge) and pin it into the curved edge of the shirt under your newly located pocket. Do this on both sides obviously (if that's where you put your pocket and if you want to!--I did this next part because I wanted my skirt a little longer and I like to use as much of the shirt as possible) Sew this in place, using your judgement for the gathers. I left the straight edges of the sleeves untouched, as shown in the picture, because I am going to sew them to the ruffle made in Step 8. 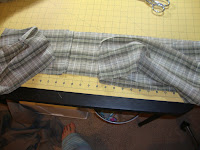 Step 8: Using a contrasting fabric, or another shirt, make two long strips (at least 75% longer than the gaps between the two weird sleeve ruffle things you just made! The height of the strip should be about the same size as the straight edges left on the sides of your sleeve ruffle). Cut one strip in half and hem the two short ends that you just created. Why you ask? Because in the front of your skirt, there are two sections because of the buttons. I wanted my ruffle to continue this split. You don't have to though, since it won't affect anything really. Also hem the entire length of the bottom of your strips. 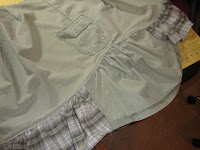 Step 9: Gather the top of your strips and attach them to the spaces between your sleeve ruffles, sewing the edges together where they meet on the sides. It should look like this once it's attached. 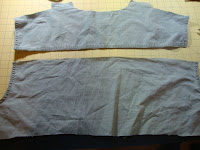 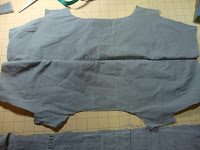 Step 10: Make the waistband. Cut the yoke (the top part of the back of the shirt) from the rest of the shirt. Split it open. Cut 2 equal strips from this fabric and sew them together at the short ends on one side. For me, the 2 sections of the yoke weren't long enough to make a waistband at my natural waist, so I used scraps from other parts of the shirt to make the strip long enough. Then cut the bottom part of the shirt top in half long-ways and make a facing for your waist band. Basically, make another waistband the same size and everything. You want your waistband a little longer than the top of the skirt so that you can finished the ends in the front for more buttons or whatever type of closure you want. You may have to get creative to make the waistband and facing, or use fabric from somewhere else. 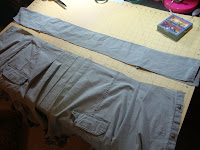 Step 11: Sew the facing to the waistband (basically you're sewing two strips of fabric together long-ways that are the same size) Fold it over, encasing the seam inside, and iron it down. (I cut my waist band and facing straight across, rather than having any curve to it. So I will be adding darts later to conform it to my body. You can cut a curved waistband if you'd rather not do darts later) 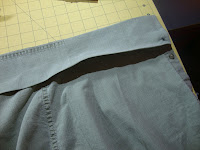 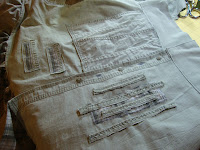 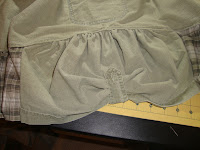 Step 13: The Details. Your skirt is mostly done now, but there are a few things that need done. For one, if your shirt is like mine, the buttonholes are too far apart for comfort. I added buttonholes between the existing ones and used buttons from the top of the shirt. I sewed some hook and eyes into the front center of the waistband to close it at the top. I also sewed a few darts into the waistband to get it to hug my body better, and sewed the skirt shut along the buttons up until the last couple so I won't have to worry about weird gaps around the buttons. I used the little button flaps on the shoulders of the shirts to hold up the sleeve ruffles I made. I used some raw seams I cut off the shirt and scrap fabric from the contrasting shirt to make fun details on the front. My favorite part of the front though is the collar pocket! 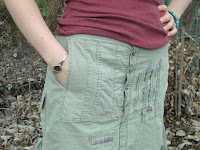 The Collar Pocket: I cut the collar and the strip of fabric under it that it is sewn into off the neckline of the shirt. I folded it in half and cut it into two parts. I then sewed these two sections together creating a "square" with vertical seams. The natural curve of the collar makes a great opening for a pocket. I then just top-stitched the pocket onto the skirt, lining up the straight-edge with the buttons. I love this pocket! 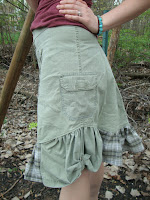 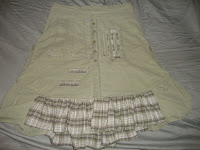 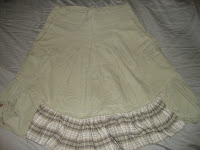 I love this skirt! It's very comfortable, but the best part is that I made it from a recycled shirt without a pattern. Sometimes just grabbing a shirt and a pair of scissors is the easiest way to make what you want. No cutting out tissue paper!